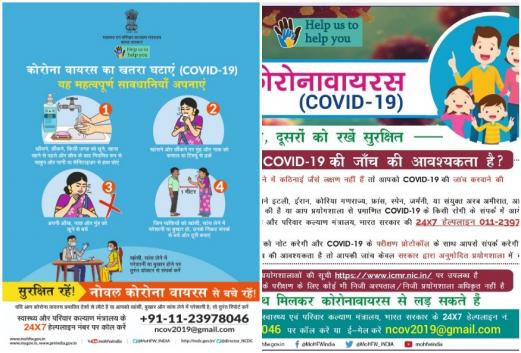 Many of the public health messages that the central government has released regarding COVID-19 have either been in Hindi or English | Image credit: Twitter

According to the 2011 Census, just about 25 percent of the total Indian population (about 422 million people) speak in Hindi.

On Tuesday, the death toll from COVID-19 in India rose to three with another patient in Maharashtra passing away. With the official count of positive coronavirus cases crossing 120, the government has jumped into hyperdrive with public service announcements and advisories to spread awareness among 1.34 billion Indians in a bid to restrict the pandemic in India.

However, it seems the government has been providing these much needed PSAs in just one language - Hindi. Be it the physical leaflets or the posts on social media, most of the government's public messaging regarding coronavirus has been in Hindi and English.

In wake of the sudden rise in cases in Italy and other countries, it becomes clear that initial measures to restrict the spread of the virus are vital in restricting the rapid rise in positive cases. The idea is to spread vital information about precautions that could help protect individuals from contracting or spreading the virus, and in turn, "flatten the curve" to prevent the global healthcare system from crashing.

To do so, the government has used a multi-channel approach, covering all mediums of mass communication including television media, advertisements, WhatsApp forwards, social media posts and posters in public spaces. It is Indians to practice self-quarantine and encouraging safe hygiene practices like hand-washing, wearing-masks, social distancing and so on.

It nevertheless came to the notice of many that most of it was in just one language other than English - Hindi.

Some came forward on social media to call out the government on this selective use of Hindi to make important public health announcements without vernacular or regional translations despite a majority of Indians speaking languages other than Hindi.

"Even in times such as these, Central Government communications only feature #Hindi, at the expense of other Indian languages. Crises are when it becomes especially important to stress upon greater linguistic inclusion and reach, reinforcing systemic neglect is hardly a good idea," Bengaluru-based writer Karthik Malli wrote on Twitter while sharing a Ministry of Health tweet on coronavirus precautions.

Even in times such as these, Central Government communications only feature #Hindi, at the expense of other Indian languages. Crises are when it becomes especially important to stress upon greater linguistic inclusion and reach, reinforcing systemic neglect is hardly a good idea. https://t.co/M6kAfydhEk

Others such as Garga Chatterjee also expressed outrage against "Hindi imperialism" and asked the Bharatiya Janata Party government why it was sending coronavirus-related messaging written in Hindi to cell phones in "non-Hindi speaking states".

Oh another indication of how pathetic the Indian government's response is... Every phone call is being prefaced with a Coronavirus advisory in..... Hindi, which over half the country doesn't speak.

And this is btw a country that's relying on self-reporting.

To put things in contrast, the Mexican government in wake of the pandemic asked public health instructions to be translated in 33 indigenous languages in order to ensure a majority of linguistic groups and not just the dominant ones receive the benefits.

A small example of how the Indian Govt are taking things seriously against CoronaVirus. https://t.co/0BnIkvDbTB

Not just Mexico, back home the Pinarayi Vijayan government in Kerala has received praise for issuing advisories not just in Malayalam but also in Bengali and Hindi, owing to the high volume of migrant workers in the state.

Others such as Dirag Biswas have started websites that contain information regarding coronavirus in various languages. However, governments and health officials have repeatedly warned against relying on unreliable information. With a variety of myths and fake news related to the COVID-19 pandemic doing the rounds, it makes sense to only rely on official and trusted sources.

According to the 2011 Census, just about 25 percent of the total Indian population (about 422 million people) spoke in Hindi. Why then is the government not making efforts to provide adequate information to all Indians including the non-Hindi speaking ones?